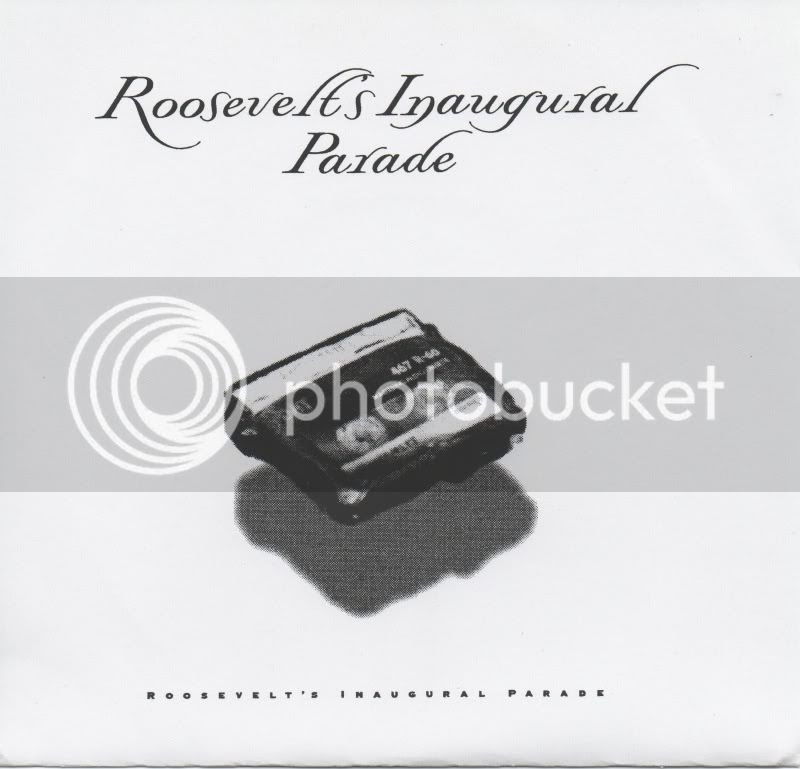 I don't know a whole lot about this band, really. I know that some of the people in Roosevelt's Inaugural Parade were also involved with the Suicide Machines and King For A Day, and that they released a split 7" with Mainspring, which I have never heard.

This is good stuff, though. It was recorded in 1995 and it completely sounds like it. Shared male / female vocals over chaotic post-hardcore. I guess it what the kids would have called "emo", I don't know. Initial Records put out lots of good stuff. There's a little bit of information about Initial here.

I've included cover scans, label scans and a scan of the Initial Records sticker that was inside, too. So now if you want to bootleg a sticker from a record label that's been out of business for 5 years, I guess you can.

Here's the link to dowload this record. Oh, and happy Halloween to all of you!
Posted by Robert at 1:39 PM No comments: 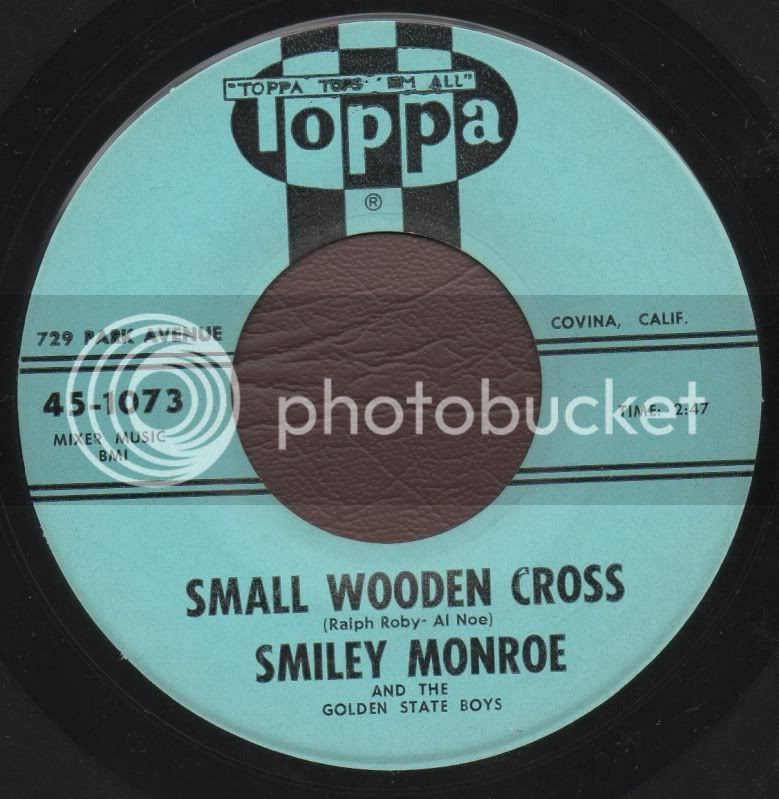 The action's all on the B-Side here, people. Not that I don't enjoy Bluegrass gospel. Because I do. But "Small Wooden Cross" isn't much. Nothing wrong with it, mind you, just not that memorable. The B-Side, though...who wouldn't want to listen to someone either bragging or complaining or both that Bluegrass is now the "Next Big Thing" out in Hollywood, California USA? I know I would.

Not much information online about Smiley Monroe. Was he a laboratory-created amalgam of Bill Monroe and Arthur Lee "Red" Smiley? The world may never know! 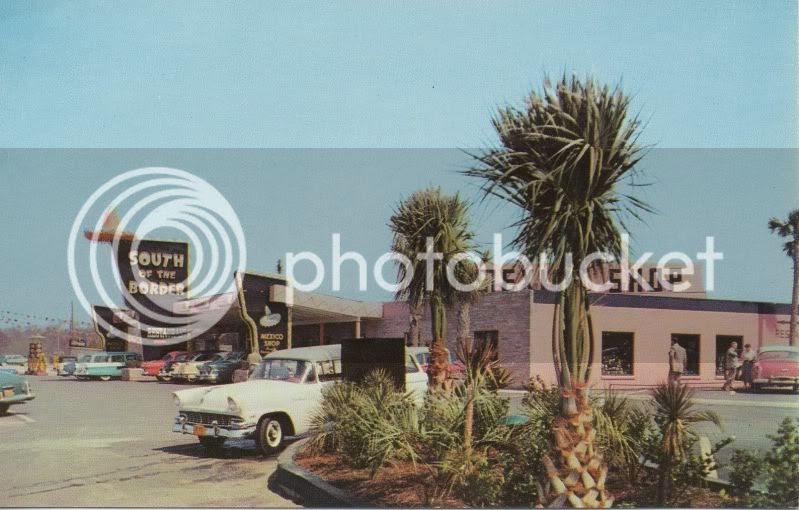 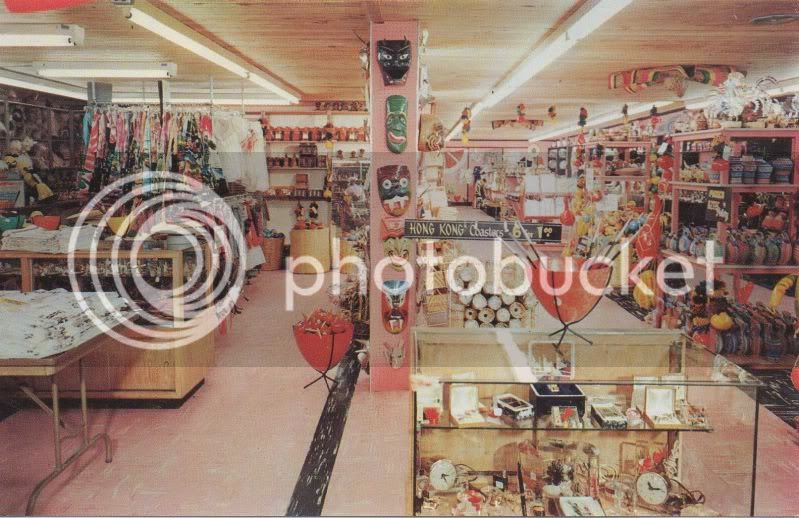 Labels: postcards, south of the border 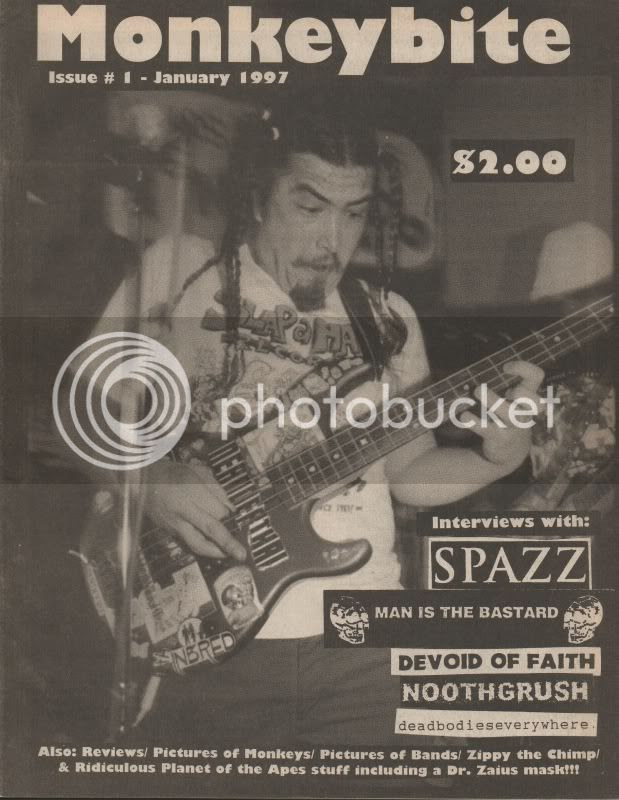 Oh, man, 1997. I'm glad I did it, but I'm really glad it's over. Anyway, when I was working as a proofreader / paste-up "artist" at this book packaging company on Hawthorne (they tore the building down a few years ago. It's that vacant lot next to the auto parts store, for all you Athens people) I decided it would be an incredibly good idea to start a 'zine distribution thing. I would get self-published material from all over and sell it at shows. Everyone loves 'zines, right? No.

Well, at least I got to read some awesome stuff. One of the more awesome titles I "distributed" was Monkeybite. It was primarily concerned with the "power violence" scene that was all the rage at the time. No, really. I'm actually being serious about that. It was a real thing. The always entertaining Metal Inquisition recently posted a power violence nostalgia post here, which you should read whether you are interested in the music or not. Actually, you should read everything those guys write. They're brilliant.

So yeah, Monkeybite was primarily concerned with "power violence" (which is a dumb name for a genre of music, but everyone within the genre knew it, too. Nobody seriously referred to anything with that term) and non-human primates. It was well written, and it had an actual sense of humor, which was sort of a rarity for the time.

I split the 'zine into two files of 32 pages each. Some of the scans are crooked as hell, but if you're the type to complain that your free download of a way-too-long Spazz interview from 12 years ago isn't 100% straight, then you may have larger problems at work.

Please click here to download Monkeybite #1. They did a second issue, which is also great and it came with a Black Army Jacket / Noothgrush split 7". I may get around to posting that soon.

Also, and I know this is a long shot, but if you are or know someone who is Gary or Andrew (the 2 apes responsible for this 'zine) then I thank you very much for putting this out, and acknowledge that I may actually still owe you money from 1997. I was such a dumbass, but then, as Sgt. D from Metal Inquisition recently said to me in a Twitter conversation "we All were, bro!"